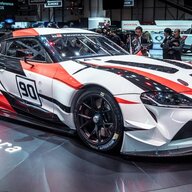 TejasJefe said:
Have been turned down by the only two reputable PFP shops here in the area due to the complicated lines of the 2020 Supra. Finally found an independent installer who came highly recommended by a friend who has had this independent installer do several of his high line vehicles that would do the install.

Ordered film from a highly rated online company to cut and send me XPEL film. The company just called and strongly recommended I cancel the order (give them credit for doing so) as even they are not doing installs on Supras.

Has anyone else had this issues?
Click to expand...