Clown horn on Supra is... Weak... to say it in a nice way. it sounds like a clown horn and a modern bicycle horn might sound better. One main factor contributing to this is because it is a single horn design that produces monotonic frequency which is identical to a clown horn. So I decided to replace it while horn is exposed. Here are few extra parts you might want to have.

So once you have your bumper cover detached, you will the the horn and its bracket attached to aluminum frame. so.. here's debate. there's only 1 torx screw holding the horn and its bracket. I was able to take it out without taking the headlight off but it would be much easier if head light was off. so pick your poison but if I had to do it again, I would chose to leave headlight because I don't want to adjust the headlight after re-attaching it.

Before removing the Torx screw, make sure to disconnect the horn. Once it is off, use 13 mm wrench to detach the horn from the bracket. Here's comparison of horns. And then survey how much room you have behind the frame. initially, I thought I would not have enough room to fit 2 horns. but after much wiggling around, I found some rooms. And roughly arranged horns with the stock bracket. See below for front and back. I was able to source the bolt that fit the nut from original horn but if you don't have 2 buckets of extra bolts from other project, it might be better to buy a matching bolt and nut that fits. at this stage, bolt is snug enough to move around and then I test fitted to make sure it is positioned correctly. once I'm comfortable with fit, I made sure the bolt is tight. PIAA Only supplied 2 strands of wire so I used connector on positive terminals and soldered the other connections.

After re-attaching the horn to the car with bracket, here's what I did to connect from original wire. instead of cutting the original wire, I used tapping connector. I also taped the connector to prevent dust and moisture to get in. as for sound... I will try to post comparison later. over all, It wasn't hard for me because I didn't have to deal with taking the bumper cover off. as far as sound goes, I think it sounds better than original horn. Is it louder? I'm not sure at the moment but it should provide more than 115 db.
my Pewter Supra Build 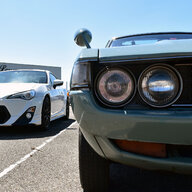 Looks like a beefy upgrade. Currently having a FIAMM AM80S waiting to get installed.