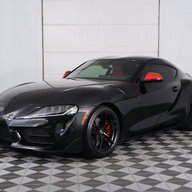 30MilesOffshore said:
Had my first race over the weekend and gotta say that the car is hard to read. The gearing was a little off for me and ended up running the course in 3rd gear which seemed to be optimal for our setup. Shifting gears on the course was ok, but I found the shifts to be too delayed for my liking.

With the helmet on and wind buffeting it also made it hard to get feedback when it came to listening to the RPM for redline. After the race, I realized that I had coded and disabled the active sound in the cabin, so next race I will make sure to code/enable that feature again. Hopefully, hearing the fake engine sound in the cabin will help me judge the RPM a little better.
Click to expand...

i didn’t know about the fake sound... I’ll have to look for that. 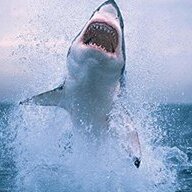 You guys running sway bars? Cusco or AFE? I noticed the Cusco is fixed but the AFE is adjustable. Any thoughts on either?

30MilesOffshore said:
You guys running sway bars? Cusco or AFE? I noticed the Cusco is fixed but the AFE is adjustable. Any thoughts on either?
Click to expand...

Cusco on my car because it was first. I think the AFE in its stiffest position can be 1 or 2 % stiffer max. So really no difference between the two, either bar you would frankly like stiffer yet imo.

7mm Spacers arrived and ready to go on! 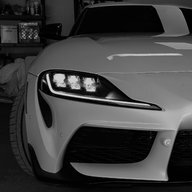 @SCCA Racer#75 , Are you still running the stock brake pads? If not, what are you running?

@30MilesOffshore - Any follow up after the spacers?
OP
OP

@JakeM The spacers worked out pretty nice. I ordered some 40mm extended bolts and everything mounts up nice with no issues. I've only been able to give them one test day so far since all the races have been cancelled.

I'm still running the stock brake pads for now. They seem decent, but I will see how it goes once the season gets started again. In the meantime, I have a set of RE71 freshly mounted on the stock wheels and awaiting to get some seat time.

I just ordered the AFE Front Sway Bar yesterday. Plan to get that installed and then an alignment afterwards. Other than that, it's just me trying to work on my lines!

JakeM said:
@SCCA Racer#75 , Are you still running the stock brake pads? If not, what are you running?

I have the Cusco 28MM Hollow bar available from my car. And probably will have MCS Double Adjustable Race Shocks available as well if anyone is interested, contact me for pricing. Wasn't planning on selling until after september. 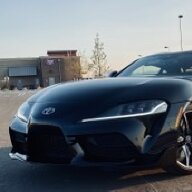 I have a few things that I wanted to post updates on for general discussion to those of you who choose to autocross your supra:

1) I was recently reviewing the SCCA car classing list and rules list that was updated/reviewed 02/1/21 and noticed that the 2021 MY Supra (what I own) has been moved to “A Street” instead of B Street as I previously thought. Now instead of running with what I thought was the Supra’s primary street/market competitors such as the Porsche Cayman and BMW M2; now I’m running the 2021 against mostly older Corvettes? Any thoughts on this?

2) I can confirm that the Eibach 29mm front sway bar fits exactly the same as on the MY2020’s. Not all sites were showing that it fit on the 21’s as they hadn’t had a chance to test fit the bar on a 21 before putting their sites fitment guide up online. The bar made a significant improvement to the cars responsiveness to turn in and definitely helps the front end flatter through sweepers. It showed in my times at the event following installation.

3) After autocrossing the car since last September, I’ve gotten to a point at which “seat time” wasn’t my only priority. Comparing replacement brake pads for use in Street category has been something I’ve been taking notes on. The main two pads I’ve compared are the CSG (CounterSpaceGarage) Spec CP pads and the G-Loc R6 pads. First, the CSG pads are EXPENSIVE. Like $850 for a set of front and rears. The R6’s are significantly less at around $524 a set. I’ll say this though, the CSG’s Spec CP pads are WORTH IT. Way better stopping power, bite, modulation and are pretty rotor friendly. The R6’s are no slouch and definitely better than stock pads; but I was very irritated to find that the “cut out’s” for the electronic wear sensor were not even close to cut right. Not only that, but I had to take the tabs on them to the grinder as they didn’t fit in the calipers as the tabs on each end of the pads were 3-4mm too long; it’s like they didn’t even attempt to test fit them on an actual car... the CSG Spec CP’s fit perfectly as stock and the sensor “cut out” is spot on. As far as noise and dust, the Spec CPs make a bit more noise as they seem to have more metallic compound in them so their not really a street pad. The R6’s don’t seem to make much noise at all but the set I used seem to create as much or more dust as the stock bmw pads. If anybody’s been comparing other pads/compounds I’d be all ears to hear their opinion/take on them.

4) Between the limitations on width in Street classes and the discontinuation of the RE-71R’s coming; have any of you been running the Falken RT-660’s? If so, what are your thoughts? The Yoko A052’s don’t come in our standard/stock size so I’m just looking for a discussion on stock wheel, 200TW tire options and why you chose to go a certain direction.

Anyways, I’ve got another event this weekend and I’ll see how the ‘21 does in A-Street against a bunch of older Corvettes and get back to you. Thanks in advance for any opinions/advice/reviews that any other autocrossing Supra owner may have. After 10+ years of auto crossing different cars, I’ve come to understand you can never learn too much from other drivers. 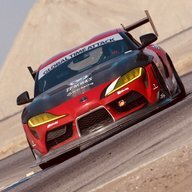 Some great info!
I have not tried the RT660 myself, but was told that in an autocross environment it'll be every bit just as fast as RE71R. That said, do expect worse tire wear than RE71R.
Shame that the A052 don't come in more 19 inch sizes. We're working with Nankang Motorsports on bringing some more sizes (including Supra 19' stock sizes) to their new 200tw CR1, so the best I can say is stay tuned for hopefully release this summer.
A bit baffling that they bumped 2021 to A-Street. Best of luck.

Regarding to classing. There is a lot of debate on this. But certainly there is a lot of "considerations" going on. My perception in general with regards to how SCCA class these cars is they don't want any one car to disrupt an otherwise healthy class (I don't necessarily agree with this principle) . BS has become a pretty healthy class in the last few years. Until the 2020 Supra came out, there were really a few cars that people thought could win so you have a variety of choices like the Camero SS 1LE, GT350, M2 and even the Lotus Evora. Then the Tesla Model 3 performance that "destroyed" BS in 2019 so it got moved. And now the 2020 Supra seems to be the car to have. With the 2021 Supra having more power and revised suspension, they fear the 2021 will put that gap further and deter the current BS cars and drivers.

So until they know what the 2021 will do, they'd rather bury it in AS and see what happens. You can only hope the 2021 isn't faster than the 2020 if you ever want a shot to be competitive in the Street class. If it is faster, they certainly wouldn't move it down in the near future unless they figure out what to do with the pony cars in BS. And if it is too fast or even remotely competitive in AS (highly unlikely though), they will move it to SS because they will do anything to protect AS participation.

Yeah so with Street class SCCA autox, you constantly has to battle with the car you like but not competitive in the class or a car you don't like but competitive in class. Obviously, if you are wealthy, is not a problem, you can just keep switching as you see fit.
https://www.youtube.com/channel/UCWhvUUCWLHxYspyZZxJZdYA
https://www.instagram.com/garytsuikk/

29 mm front sway I assume.
what size tires front and rear on 19s?
265/285?
Max camber front and rear. What about toe?
Anything else im forgetting?

29 mm front sway I assume.
what size tires front and rear on 19s?
265/285?
Max camber front and rear. What about toe?
Anything else im forgetting?
Click to expand...

In a "perfect", no budget limit world:

I'd start with the sway-bar, CSG Spec CP pads and 7mm spacers w/bolts and the panel filter. That'll make the car competitive in B-Street for sure. I'd do tires (265 front on stock 19's and 285 rear on stock 19's) and shocks next after some good seat time.

Good luck out there.

what are you all doing for rear toe on stock suspension with the 29mm front sway?
OP
OP

I have found that the car doesn't really need much done to it to be competitive. There is a Camaro and M2 that I run against and we are all within tenths of each other so it makes it really fun competing as every race is up in the air on who will win. My car is a daily driver so I just switch out wheels on race day.

1slow_mk5 said:
what are you all doing for rear toe on stock suspension with the 29mm front sway?
Click to expand...

Registering for my first scca autocross event and they said I can’t do the BS class because I have a front strut bar. Dammit the one thing I do just to dress the engine bay up a bit...

I’ll need to go and read through this whole thread when I have time, but anyone know what class I need to register for? I know I know I should just take it off
You must log in or register to reply here.
Share:
Twitter Reddit Pinterest Tumblr WhatsApp Email Link
Top