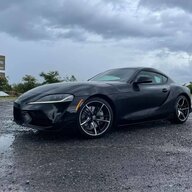 This year I put myself in a 2021 Supra. I liked them since they were first announced. I was close to getting a 2.0 but I knew if I did I would always wished I spent the extra to get the 3.0, so that's what I went with. I was daily driving a 335i with the N55 so the engine platform was similar. I traded one BMW 3.0 for another. Everyone tells me this car is "fire", and well, its black, so I call it the Amaterasu.

Not long after I got the car Import Faceoff was having a car meet at the local drag way with Noel G. hosting. I took the car down the track without practicing launch control. First run to car launched great then cut out at 50mph the rest of the drive. I tried a second run without burning out or using launch control and ran a 12.7.

I'd like to keep my carpet nice for a long time so I decided to order some mats from Car Mats Customs.

After about two months of owning the car, I pulled the trigger to get the JB4.... and I have no regrets. I like that I can change the map by a few clicks from my phone. This version also has the EWG pre installed.

I used to love hearing my loud bov from my rx7. I was a little disappointed to discover that the Supra's turbo system doesn't have a bov to went into the atmosphere. After a little research, it was claimed that a cai makes a nice "bov" like sound. Between the intake and the JB4, it definitely sounds much nicer. It doesn't pick up well in video, but in person it sounds great. 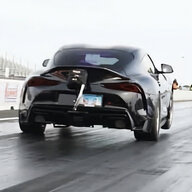 That powerloss at 50mph is a little concerning. Was that Pre-JB4? Did you hit limp mode somehow?

zrk said:
That powerloss at 50mph is a little concerning. Was that Pre-JB4? Did you hit limp mode somehow?
Click to expand...

I’m not sure what happened. The bmw guys said it was a failed launch control attempt, you only get a 3 second window or so. That was before JB4. 2000 miles later and no issues.
OP
OP

I saw a box of Meguiar's Hybrid Paint Coating. I never heard of it before. From what I could see, it looks very user friendly. The thought of putting a paint protection on my car had crossed my mind and I have no experience with ceramic coatings. I bought the Meguiar's and decided to try it out. It is very straight forward and easy to use. There is literally 3 steps in this process. Basically make sure your car is clean and dry first. I didn't have to worry about any paint correction because my car is only a few months old and I hand wash it myself. I washed with the Meguiar's Gold Car Wash as suggested in the directions. Then I carefully dried the car everywhere and let it sit in the garage over night. The next day I used the surface prep to prep the car, spraying 2'x2' to 3'x3' areas one panel at a time and letting it sit for about a minute before wiping off. After the whole car was done I was able to apply the hybrid coating. I sprayed the applicator pad and let it sit for about 3 seconds then I wiped the car in 2'x2' sections one panel at a time until I finished the whole car (same as I did for the prep). The paint cannot get wet for at least 24 hours after the coating is applied. It needs a week to fully cure, so the car wasn't washed until the next week.

I had no issues using this and my car looks great. I was nice before but now it seems even shinier/glossier and smoother. This was my first time trying any type of coating and it was very user friendly. I'm not a detailer or have any detailing experience. If it holds up for a year that's great. Either way I'll get it ceramic coated after.