2020 Toyota GR Supra vs. 2019 Ford Mustang Shelby GT350: Which Is the Better Driver's Machine?
Vastly different yet similarly capable, one of these rear-drive sports coupes begs to be driven harder than the other. 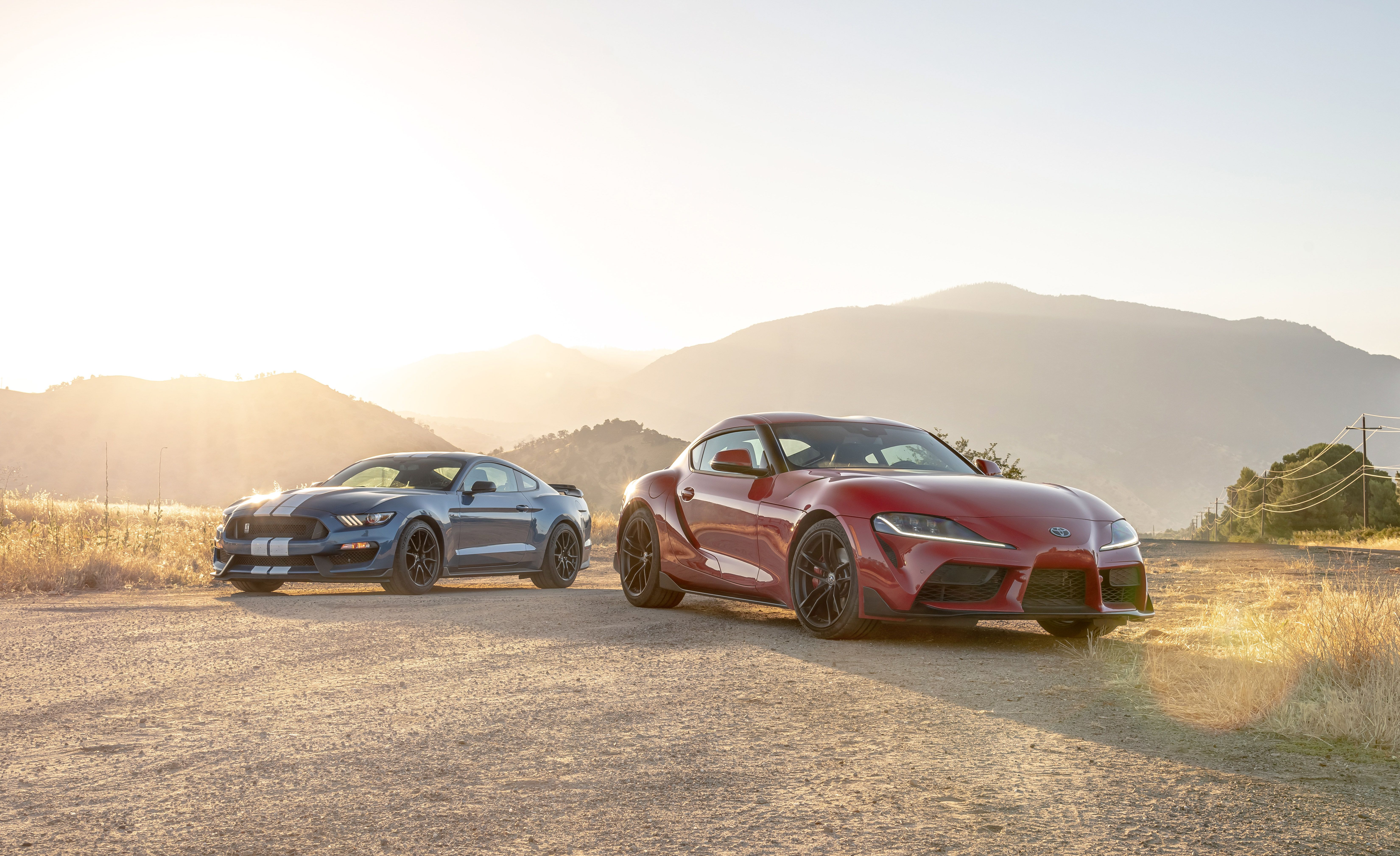 This isn't just a comparison test between a pair of high-performance cars. This is a fight between the 2019 Ford Mustang Shelby GT350 and the 2020 Toyota GR Supra. It's a battle between big and small, displacement versus refinement, three pedals versus two paddle-shifters, old school versus new. America versus Japan.

It's a fight that has been in the works for more than 50 years. Carroll Shelby's first Mustang GT350 was built in 1965, constructed in a small industrial building in Venice, California. That model was long gone by the time the first Toyota Supra hit the street in the late 1970s, and it was already a valuable classic when the fourth-gen Supra, with its 2JZ twin-turbo inline-six, started slaying Ferraris in 1993. Now, with the return of the Supra for 2020—albeit with more than a little help from BMW—these two legends are finally rolling off assembly lines at the same time. Both of these cars have engines in front driving the rear wheels, and that's about the extent of their mechanical likeness. Just like its ancestor, the much larger and heavier Shelby is all V-8 thunder and manual gear selection. Code-named Voodoo, its V-8's 5.2 liters of double-overhead-cam greatness is famous for its flat-plane crank and 8250 rpm redline. It breathes air atmospherically, makes 526 hp, and sounds like the demon love child of an American muscle car and a Japanese superbike. Every GT350 gets a six-speed manual gearbox. Our test car cost $64,860.

For 2019, Ford has dialed up the GT350's chassis, basically creating a GT350R with a back seat. To maximize grip, its standard magnetorheological dampers have been recalibrated, and its front springs are 10 percent stiffer to reduce dive under braking. Its rear springs are now six-percent softer, and there's a stiffer anti-roll bar than before. Ultra-grippy Michelin Pilot Sport Cup 2 tires have replaced the previous Pilot Super Sports. Our test car also was equipped with the optional Handling Package, which includes camber plates atop its front struts, and our test car arrived looking as if there was more negative camber dialed in than on Joey Logano's NASCAR Ford Mustang at Watkins Glen. Created in partnership with BMW, Toyota's newest Supra is for the first time a two-seater. It's also a mechanical doppelganger for the equally fresh BMW Z4. Like its most desirable forebearer, the Supra is packing a boosted inline-six, although this time there's one turbocharger instead of two. BMW's 3.0-liter is rated at 335 horsepower, which makes this the most powerful unmodified Supra ever. An eight-speed automatic is the only transmission offered. Our Launch Edition model rode on a set of 19-inch Michelin Pilot Super Sports, and the bottom line on the sticker read $57,375.

With the Toyota packing 191 fewer ponies than the Shelby, and the Mustang wearing larger and stickier rubber, you might imagine that this would be a beatdown. But dig a little deeper into the specs, and you'll see that the Supra weighs 446 pounds less than the 3821-pound Mustang and its wheelbase is nearly 10 inches shorter. The Supra, which is about the size of a Porsche Cayman, is also more powerful than Toyota is telling us. Or is it BMW?

We recently strapped a Supra to a chassis dyno where it registered 339 horsepower and 427 lb-ft of torque at the wheels, which means the engine is considerably stronger than its official “at the crank” ratings. It also means it's packing more torque than the Mustang's V-8, which is rated at 429 lb-ft before any power is lost turning its transmission and rear axle. And that shove hits down low, at just 1600 rpm, which explodes the Supra off the line and out of tight corners. The straight six redlines at 6500 rpm but pulls strongly to its 7000-rpm fuel cutoff, and its quick shifting eight-speed will hold gears in manual mode. At the test track the Supra hit 60 mph in just 3.9 seconds, spanking the Mustang by three-tenths. Once the Ford's big V-8 finds its power curve at the top of its tach, however, the Mustang does come on strong, beating the Toyota to 100 mph by half a second and to 140 mph by 3.6 seconds. Both cars finished the quarter mile in 12.5 seconds, which makes them the quickest Supra and GT350 we've ever tested. The big-winged twin-turbo Supras of the 1990s, which also weighed about 3400 pounds, ran the quarter in 13.1 seconds, while the original 306 hp GT350 was a mid-14–second car.

On twisty two-lane roads, the Toyota's traction-control system gets quite a workout, although it's tuned perfectly and keeps the Supra charging forward. By contrast it's easy to lug the Mustang's 5.2 out of slow second-gear corners. It takes a beat or two for the V-8 to climb back over 4500 rpm and start making power, which allows the Supra to pull away slightly down short straights. On the upside, the Shelby's lofty power curve keeps it from being a handful. This isn't a tail-happy drift machine eager to spit you off into a ditch; it's easy to drive quickly. The V-8 also sounds like it should without the manufactured crackles and pops you get from the Supra's six. Unfortunately, the Voodoo is so buzzy at more than 6000 rpm that the Shelby's pedals tingle under the driver's feet, and its shifter rattles like a baby's toy. It's a visceral experience. We flogged both these cars hard for more than 600 miles of driving in the Sequoia National Forest. This exercise did no favors to the fuel economy calculations reflected in the accompanying specification charts, but it did wind up giving us a solid baseline for comparing the cars' relative characters. The Supra is more tossable and better balanced than the burly Mustang, but the skittish nature of its suspension over bumps and the lack of feedback in its steering and brake pedal don't build confidence. Not right away. The Supra feels nervous, at first, but soon you learn the grip is there, and the Toyota can keep the same pace as the Shelby. In the real world both cars can be driven hard for hours nose to tail at the edge of their limits. The Mustang's wider stance, firmer suspension, and tackier tires did add up to slightly superior numbers at the test track where both cars generated more than 1.00 g of grip on the skidpad.

It turns out it's easy to make a Shelby GT350 invisible. Just park it next to a 2020 Toyota Supra. Onlookers walk right past the Shelby like it's a beige Camry and ask if they can take a picture of the Toyota. Especially folks younger than 40. It isn't exactly beautiful, and parts just look wrong from some angles, but there's no denying the dramatic draw of the Supra's shape.

Inside, its tachometer is front and center with its redline at 12 o'clock, where it should be. Aside from its gauges the Toyota's cabin is mostly BMW, with modernistic design and impeccable construction. It also feels tight and has mail-slot sightlines, but the Supra's cabin lives up to its steep price point, as does the rest of the machine. Some may think $57,400 is too much for a Toyota, but they won't after they drive it. By comparison the Mustang's interior is pleasingly spacious. It's also a bit retro with large round dials and a levered parking brake, but it couldn't be more ergonomically simple. Pedal spacing is perfect, and its firm brake pedal is reassuring.

With its small back seat and larger trunk, the Mustang is certainly the more practical of these two factory hot rods, but the more refined Toyota is more comfortable for daily use. It rides better than the Ford, it's considerably quieter on the highway, and its seats aren't as aggressively bolstered. Although they get a bit squishy when you're tossing the Supra from corner to corner, the Toyota's buckets are preferably cushy for weekend road trips. The Supra also gets better fuel economy than the Shelby, and its highway cruising range is far superior. As we learned with our long-term GT350, the Mustang's 16-gallon tank is good for only about 250 miles.

But we don't care. As impressed as we are with the fifth-generation Supra, it's the old school, three-pedal Mustang, with its race-car–like turn-in and V-8 thunder, that speaks to its driver the loudest, both literally and figuratively. Driven back to back, the Ford is simply too engaging to not win this shootout. But it wins it by a nose. 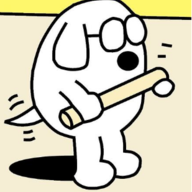 A friend of mine down in FL has a GT350, so I sent him this article. We've been halfway-planning a trip down to Deals Gap, in cars this time, with some sportbike buddies who we used to go down there annually with. If we make it happen this fall, we're definitely a bit more eager to swap cars for a run after reading that article. 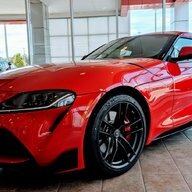 That was a very long and wordy way to say that the Supra MKV lacks a Manual Transmission.
https://www.supramkv.com/threads/purchased-a-launch-edition-red-for-msrp.2251/

darkloki said:
That was a very long and wordy way to say that the Supra MKV lacks a Manual Transmission.
Click to expand...

The mustang also has a flat plane crank v8 that revs to over 8k.

iconicshade said:
The mustang also has a flat plane crank v8 that revs to over 8k.
Click to expand...

And i think the b58 won't rev to 8k either. Being a bimmer engine, it's stroke is way longer than the bore. 82×94.6 which means very torquey engine,but not so great revving.

Supra with a downpipe and tune takes the lead 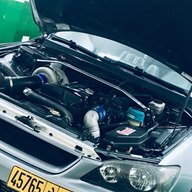 The sad part is I'd be happier owning the GT350 rather than the Supra. Although, I am always a 2jz-Supra die-hard fan.

That Manual transmisson and the third pedal is a very big factor in owning this car. The automatic will soon gets boring, just like what faced so many GTR R35 owners, they just got bored. 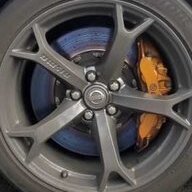 Saeedali78 said:
The automatic will soon gets boring, just like what faced so many GTR R35 owners, they just got bored.
Click to expand...

Not yet after 10 years. It is boring on the street but when you get to do it on tracks or autox, the DCT is awesome. I am sure if people can look pass that, the Supra will be awesome.
https://www.youtube.com/channel/UCWhvUUCWLHxYspyZZxJZdYA
https://www.instagram.com/garytsuikk/

The two have very different philosophy and probably attracts totally different customer base also. I must say I like the GT350 a lot, and admit that I wouldn't mind owning one just for that sound track.
https://www.youtube.com/channel/UCWhvUUCWLHxYspyZZxJZdYA
https://www.instagram.com/garytsuikk/

white_turbo said:
Not yet after 10 years. It is boring on the street but when you get to do it on tracks or autox, the DCT is awesome. I am sure if people can look pass that, the Supra will be awesome.
Click to expand...

Hmm, but the Supra doesn’t come with a DCT.

Toyotawild said:
Supra with a downpipe and tune takes the lead
Click to expand...

Just a tune would be enough, somewhere around 400whp and another 50 ft/lb I think

Saeedali78 said:
Hmm, but the Supra doesn’t come with a DCT.
Click to expand...

True, but most people say the auto is fast enough.

white_turbo said:
Not yet after 10 years. It is boring on the street but when you get to do it on tracks or autox, the DCT is awesome. I am sure if people can look pass that, the Supra will be awesome.
Click to expand...

How can they look past that when the power output is no where close to the R-35 Skyline out of the box...
https://www.supramkv.com/threads/purchased-a-launch-edition-red-for-msrp.2251/

darkloki said:
That was a very long and wordy way to say that the Supra MKV lacks a Manual Transmission.
Click to expand...

That's what I got out of it. The Shelby is great and that engine is outstanding, but it was still a close comparison. Put a manual in the Supra and they'd have a hard decision to make.
Advertisement