^^ Toyota is being confusing now. I love those Toyota UK pictures but assuming this has been covered on multiple car new sites already:

Tada- san is now saying that the trouble with producing the S-FR is that it's still difficult to keep the cost as low as they wanted (and maintain their quality level one assumes) but mainly the S-FR's would see competition from all the used FR-S's, 86's and BRZ's in the second and third hand market now.

It makes sense but... this could also be construed in the same way as claiming there "wasn't demand" for a manual MKV Supra.

Or it could just be Toyota's way of suggesting they want to continue with the 86 2nd gen and make the MR2 the "third brother" above the brand new and used 86's.

Still... I hope this is just more testing of the waters PR. The S-FR deserves a chance. 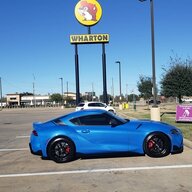 Bryster said:
Keep your eye out for some announcements
Ok, that is intriguing
Click to expand...

where did you see this?

Coldskeet said:
where did you see this?
Click to expand... Still on display in Japan.

I really think Toyota should work with Mazda, and share the MX-5 platform. Toyota could surely fit an SF-R like coupe body over it. And use one of their own engines for a change. Most of the work is done, the MX-5 is already fantastic, and if Toyota are determined to platform share for all their new sportscars, I can’t think of a better company than Mazda (ok, maybe Lotus if they do a new MR2). Sadly, I think the SF-R is dead in the water at the moment.

I think Toyota had some definite ideas that were assured from the getgo such as the Supra following the GT86 but I think they've been toying with a lot of other sportscar and sports trim model ideas since all that began. The S-FR development got as far as it did because of that.

I would really like to see the S-FR go on sale alongside the other three. It's a perfect little driving machine concept that isn't on the same level as the GT86 let alone the Supra but has all the right ingredients at a low price point.

So far apart from a 2nd gen GT86 and the Supra MKV Toyota has toyed with the S-FR production ready concept, a possible hot hatch Corolla (how hot or mild is anyone's guess), at least the possibility of the Celica name being of renewed interest since they recently trademarked it again (maybe they just wanted to hedge their bets on that one), and maybe or maybe not a new MR2.

It's hard to tell exactly how many vehicles they want to do, if they're just trying many things internally because they can or if they will stay strictly and only to Akio Toyoda's "Three Brothers" sportscar lineup wishes.

KahnBB6 said:
I think Toyota had some definite ideas that were assured from the getgo such as the Supra following the GT86 but I think they've been toying with a lot of other sportscar and sports trim model ideas since all that began. The S-FR development got as far as it did because of that.
Click to expand...

They went quite far with the SF-R, debuting more than one version at motor shows, even doing up a commercial which is still up on YT I think. Seems like a lot of effort compared to the typical concept that has no production plans.

I would really like to see the S-FR go on sale alongside the other three.
Click to expand...

I would too, but I think a few factors work against it going into production. First, I think Toyota were genuinely stung by years of complaints the 86 was not fast enough to be called a real sportscar, and the SF-R would be even slower. Second, I think it might not be possible to produce it cheaply enough to fit far enough below the 86 and still be profitable. People already lament the cheap interior and build of the 86, the SF-R would have to be even cheaper, and would no doubt get knocked for it. I hope I’m wrong and they put it or something very much like it (cheap ultra light RWD coupe) into production, but I am doubtful.

So far apart from a 2nd gen GT86 and the Supra MKV Toyota has toyed with the S-FR production ready concept, a possible hot hatch Corolla (how hot or mild is anyone's guess),
Click to expand...

Gotta be honest, a hot Corolla really doesn’t interest me, but I understand the appeal. Just not a fan of the styling of the latest Corolla.

at least the possibility of the Celica
Click to expand...

I actually think a new Celica, on the new TNGA platform, makes the most sense as the ‘junior’ brother, below a slightly more powerful 86, with the Supra up top. The platform already exists, and Toyota’s new 2.0 Dynamic Force engine gives 125kW/168HP, perfect for a base new Celica priced just above a Corolla (with room in future for hotter turbo versions). The last Celica is still a great looking car, they could take inspiration from its classic wedge shape for a new one. 2+2, liftback practicality, as economical as a Corolla, a new Celica makes a lot of sense as the third sportscar.

or if they will stay strictly and only to Akio Toyoda's "Three Brothers" sportscar lineup wishes.
Click to expand...

Wait and see! I just hope they keep at least one sport coupe option going below the new Supra, since the Supra is an expensive, limited production car that will never be as mainstream or accessible as the 86.

Not sure if Toyota is hinting anything with this pic.

With Tada hinting that the Supra might be Toyota’s last present to petrol heads, I wonder what powertrains will future 86, Supra, and the upcoming small sports car use?

AsupramkvC said:
With Tada hinting that the Supra might be Toyota’s last present to petrol heads, I wonder what powertrains will future 86, Supra, and the upcoming small sports car use?
Click to expand...

^^ Tada meant the MKV is their last fully intentional, no exceptions pure gasoline-only sportscar. They may still have some window left to do another but it more than likely won't be their focus with another sportscar model going forward.

The 2nd gen GT86 is more than likely going to use another reworked Subaru boxer engine. Probably a tuned up FA24 non turbo that would make significantly more horsepower and torque than the FA20 NA. Or just a nearly off the shelf FA24 turbo lifted right out of the Subaru parts bin and worked over with D4S dual injection and whatever teardown failure analysis improvements Toyota wants applied.

If the S-FR is produced the engine type is too early to say.

A future MR2 would more than likely be some kind of modest performance gasoline hybrid electric with the potential packaging provided by the RWD mid-engine layout.

Electric-only might still be a bit difficult at the price points these fairly compact vehicles would need to sell at. Also, since Toyota is very focused on the driving dynamics of each, an all-electric MR2 as opposed to hybrid electric would probably still be difficult without compromising driving range, at the limit handling ability and durability on the track.

I do see proven all-electric performance in Toyota's future but the technology still has to continue to improve and come down further in price... and weight. Teslas are known for their stupid 0-60 times but how much can you keep repeating those figures before battery degradation and/or firmware limiters start to kick in? In comparison Porsche claims their Taycan EV will have very repeatable performance figures both on the street and track but even if their claims hold up, look at the price for the full package of technologies in those Taycans.

All just my own analysis and speculation here but at current time I see Toyota tweaking their MKV Supra as gas-only, most likely making the 2nd gen GT86 gas NA or gas turbo boxer, the S-FR very inexpensive gas-only (if produced) and the MR2 as using a much beefier version of their hybrid-electric technology.

BestCar article on why the SFR was canned. But the author speculate maybe something could happen with the Mazda since Fiat killed off their version of the Miata.

Same. It seemed nearly production ready and that interior was almost perfect.

For it to make sense in the lineup the GR86 would have had to use a turbo boxer engine (still mild power not much more than 250hp tops).

I really don't see this as having been considered for the MR2 badge. I still think that will be a hybrid-electric or full electric when or if it comes out even if it's in-house or actually gets some other company (Porsche?) to collaborate on sharing the platform.

The S-FR seemed to be totally possible as a Toyota-only super basics design with a 6-speed, LSD and decent little engine.

2JZ-No-Sh*t said:
BestCar article on why the SFR was canned. But the author speculate maybe something could happen with the Mazda since Fiat killed off their version of the Miata.

I do agree with the article author's speculation. The S-FR would have conflicted, as he suggests, with the (available in Japan and Europe) GR Yaris. That is, not the new Yaris GRMN 1.6L I-3 Turbo AWD car.... but the previous generation FWD Yaris with a supercharged engine and FWD.

He also speculates on used Toyota 86's and honestly he's not wrong to point that out. Many buyers wanting a cheaper deal on a newish RWD 6-speed M/T coupe would just go for a used 86 rather than a similarly priced new or more expensive S-FR that isn't quite on the same level.

I also have thought myself as the author suggests that a future generation Miata could be another partnership collaboration since Fiat has now cancelled their Fiat 124 twin. In this case perhaps with Toyota using an evolution of Toyota's all in house S-FR platform which was near production ready. All speculation, hopes and hypothesis but it certainly is possible if very far fetched.
Last edited: May 4, 2020
Advertisement